Tantric Ganja Elixir is a healthy drink that increases pleasure and consent compared to alcohol. It can be consumed as a social or health drink. We are developing two versions of Tantric Ganja:

Investor Support
We have developed a prototype and need investor support.
Direct Donations.
Small contributions will help us bring this product to the public. Donors will be first in line for a complimentary sample!
Members Login Here!

Mojo studied Sociology and Women’s Studies at York University. After university, his first major trip was to Israel on a soul-seeking mission. He was one of the first people with a Muslim name to apply to volunteer at a kibbutz. 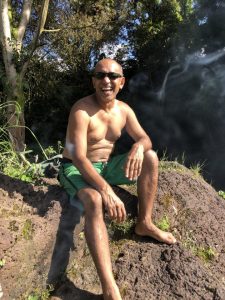 Mojo keeping a smile after the Lava Flow in May 2018

He lived and worked in various small jobs; as an English teacher in Japan, a taxi driver in Toronto, and in nightclubs in Germany. The lack of freedom required for traditional jobs was constraining to him. So he has always been working on his own quirky entrepreneur projects.

While living in Japan, he heard about a hedonistic spiritual community in India run by a feminist guru who was known as Osho. He traveled there and spent 4 years gaining knowledge and insight into different models of community living. He has since incorporated these models into the design and foundation of Hedonisia Hawaii.

As the Community Director of Hedonisia, he began to develop the concept of making money by doing good for the world and synthesizing the ideas he picked up from his travels.

On May 27, 2018, that dream was put on a fiery hold as Hawaii’s Kilauea volcano erupted and destroyed the community.

With the loss of his main ‘jig’, Mojo decided to turn his sadness into energy to work on other projects that were on hold.

He had always been experimenting with Tantric Ganja on his sex-positive friends in Portland with great results. But he had hesitated to bring the product to market because Hedonisia took so much of his time.

But now that Hedonisia is gone, he suddenly has more free time!

Though he is managing a Rebirth Hedonisia Crowdfund to rebuild in the future when it is safe to do so, the physical community is on a volcano-induced hiatus.

After the flow, Mojo moved full-time to at his apartment Micro-Community in Portland OR.

Ironically, with the loss of Hedonisia, Mojo now has time to focus on a product that will bring pleasure to many people’s lives. And these days, with so much misery and stress in today’s world, it might be nice to have a little more sensual pleasure with Tantric Ganja!

One of Mojo greatest milestones is that he has been able to come up with a new approach to feminism that is more empowering to women without being threatening to men. He has been able to make that idea of feminism into a successful business and change the conversation about abortion issues. He has given the opportunity to any woman with an internet connection to make her own body decision and was able to accomplish this without giving up his own masculinity. Mojo has continued to develop and promote the concept of allowing women to be empowered and become business owners.

Mojo wants to continue teaching and spreading this idealistic business approach to achieve social change. His vision is to make a lasting, global impression with the EcoFeminist and Activist Entrepreneur approach to resolving problems in the world today.

We welcome you to either make a donation or find out about being an investor in this project!

Tantric Ganja is a marijuana-based aphrodisiac that increases empowered consent for women and reduces male aggression.

We have developed a prototype & need Investors or Partners for this product’s development and launch.

Our goal is to bring the Tantric Ganja Elixir to market in Portland OR, where marijuana is legal. We will expand from there to other legal markets.

If you would just like to help support our work please donate below.